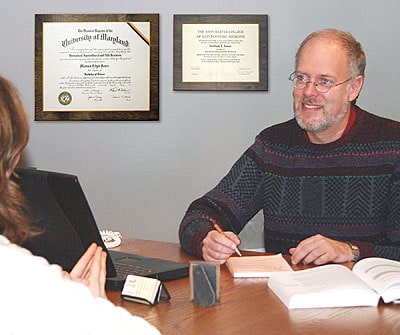 Bastyr University receives its programmatic accreditation from the Council on Naturopathic Medical Education (CNME), an accrediting agency recognized by the US Department of Education.

Bastyr receives institutional accreditation from the Northwest Commission on Colleges and Universities (NWCCU), also recognized by the US Department of Education.

He also serves as Preceptor for students from many of the naturopathic medical schools, and is a mentor to several naturopathic practitioners.

Originally from Washington, DC, Michael Reece has been in Lancaster County since 1983. Early in his career, he was provided the opportunity to mentor with Henry Williams, MD, DHt, and Luelle Hamilton, DO, two longstanding members of the Lancaster medical community.

Michael continues to keep up with continuing education, both in the naturopathic and conventional medical worlds.

In November of 2020, I was diagnosed with stage 3 rectal cancer. I underwent chemo and radiation for 5 weeks, then a number of surgeries. The last phase was 4 months of intense chemo using a regimen known as FOLFOX. After my first round I was so sick that I felt that I could not continue with the regimen. My oncologist told me that I certainly had the option of not continuing with FOLFOX but my prognosis would not be good. I contacted Dr. Reece and he put me on a regimen of supplements and homeopathy, which made the side effects tolerable so that I could continue with the prescribed 8 treatments. I credit Dr Reece with making it possible to take all 8 treatment and significantly increase my chances of survival. Thank you Dr. Reece!

Naturopathy operates with the idea that a person is an interrelated whole and that health means the optimal functioning of that entirety. As a client and a nurse, I’ve appreciated both the practice and the results of that approach for myself and my family, as well as the absence of adverse side effects. We’ve tested naturopathy in a wide gamut of {physiological} needs, and it has well proven it’s value.

My menopausal symptoms have been mellowed by the use of homeopathic medicines and naturopathic therapies. That phase of a life’s journey requires the wisdom of someone knowledgeable in the natural approaches to a women’s healthcare. For me, Michael Reece, ND prescribed those remedies needed to balance all the changes occurring within my body. All the associated symptoms that most women complain about are simply not a part of my daily life. For the better part of three years as menopausal symptoms appeared, Michael Reece suggested appropriate remedies. Now, in my post menopausal years, I continue the natural appoach. My grandmother was 57-years-old when I was born. I only knew that precious soul in her post menopausal years. She was a delight. My goal is to be that kind of grandmother.

My appreciation of Michael Reece has continued to grow over the many years I have been his patient. His integrity and vast knowledge combined with well-developed listening skills make him an excellent naturopath. I continue to recommend him to friends and those I meet who are interested in alternative health care.